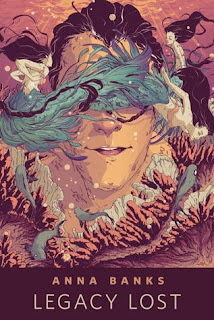 He is a mer-prince, she is the mermaid princess that his family orders him to marry so that their kingdoms unite. Grom dreads this arrangement, until he meets Nalia — both beautiful and smart, she’s everything he ever wanted. But just when their connection grows deeper, tragedy strikes. Legacy Lost is a prequel story to Anna Banks’ debut novel, OF POSEIDON.

SPOILERISH REVIEW. IT IS SUGGESTED THAT YOU HAVE READ BOTH OF POSEIDON AND LEGACY LOST BEFORE READING THIS REVIEW.
This is just a short quickie review. I’ve never actually been a huge fan of short stories/novellas, and don’t ask me why because I do not know. I’m slowly being won over to them though because they are a great way to give you information that doesn’t necessarily fit into the original story.
Throughout the entire time almost of reading Of Poseidon I’d wished for a little more information about the relationship between Grom and Nalia, what had happened before the explosion, and the aftermath. Not necessarily every single detail of course, but information than we’re given in the parent story. Legacy Lost did not disappoint me. I loved watching the dislike between them grow to like and respect.
Now what I want to know though is what reasons Nalia had for leaving after that explosion, and making everyone think she was dead. There’s one obvious reason that anyone who’s read this or Of Poseidon can think of, but I’d like to think there’s more to it than that. With the way Of Poseidon ended though, I know my questions will be answered in book two, Of Triton. Too bad we have to wait a year to read it.