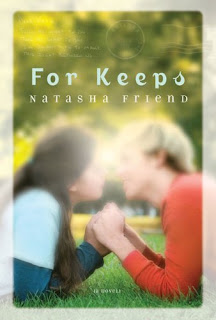 Summary from Good Reads:
For sixteen years, Josie Gardner and her mom, Kate, have been a team. It’s been the Gardner Girls against the world, and that’s how Josie likes it. Until one day, in the pet food aisle of Shop-Co, they run into the parents of Paul Tucci, Kate’s high school boyfriend—the father Josie has never met. If Mr. and Mrs. Tucci are back in town, it’s only a matter of time until Paul shows up. Suddenly Josie’s mature, capable mother regresses to the heartbroken teenager she was when Paul moved away. Meanwhile, Josie’s on the verge of having her first real boyfriend, while her free-loving best friend, Liv, begins yet another no-strings-attached fling. When Josie learns some surprising truths about Paul Tucci, she finds herself questioning what she’s always believed about her parents—and about herself. In FOR KEEPS, Natasha Friend tells a fresh, funny, smart story about what happens when a girl gets the guy she always wanted and the dad she never knew she needed.

My thoughts on the book:

I wanted to love this book because I can relate to it on a personal level. Now that I’ve sat for a couple of days thinking about it, it just didn’t meet my expectations.

The interaction between the two families were very brief. I would have loved to see more especially between Josie and her father, maybe a time where they actually hang out for a day to start the process of getting to know each other. We were given little to nothing in terms of interaction with the rest of her new family. One uncle is mentioned but never talked to, while the other swoops in to save the moment, then swoops right back out never to be seen in those pages again. We get the grandmother through Josie, instead of from her.

The one thing I did like was Josie’s reactions. She reacted in such a real, believable way to the whole situation. Much like I think I’d act in that situation, and I’m nearing 24 instead of being 16

River Marked by Patricia Briggs
Review: 172 Hours on the Moon by Johan Harstad
Review: Hallowed by Cynthia Hand
The Espressologist by Kristina Springer