﻿I was a little too busy yesterday to do this, but I did get it done today! 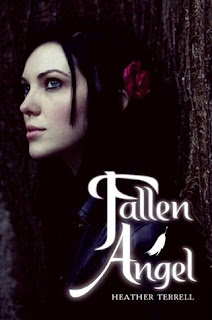 From Amazon:
A new guy named Michael has been watching Ellie at school. It is soon revealed that he remembers Ellie from a trip their families took years ago, though Ellie has no similar recollection. But being near Michael awakens her desire to learn the truth about herself, which seems that only Michael knows. Guess what? Her recurrent dreams about flying are not dreams after all, as the two really can fly. That’s not all: both teens can read people’s thoughts, and each has developed a taste for blood. Ellie fears that they are vampires until her parents finally tell her the truth about the biblical story of fallen angels. Soon evil is following Ellie, and the teens are forced to choose which side of the ancient battle to align with.

~~~~~ My Review:
I absolutely loved the second half of this book. The first half, not so much.

Ellie meets Michael within the first few chapters and seems to love him from the moment she sees him, which brought to mind Twilight. And Twilight was there to stay when Ellie and Michael believed that they’re vampires. And while I did end up liking the way the author incorporated vampires into the story, I didn’t like thinking about another book during my reading.

In regards to Ellie and Michael themselves, they were very underdeveloped. Sure Ellie goes around saving the world one third world country at a time with her parents, and same with Michael and his parents, but what hobbies do they like? What music? Anything? We’re given nothing in this regard. I did like Ruth though. I hope to see more of her in Eternity.

The second half of the book the ardour considerably cooled, thankfully. Ellie goes on the run to protect her friends and familes, and to find out why she’s so special. I liked the idea of her heading to England to talk to the Professor, so I was disappointed when the story went in another direction.

Overall, I liked this book enough that I will be reading Eternity when it’s released, to find out what happens to everyone, especially with the bomb dropped towards the end. Fans of Twilight, you’ll probably love this book, so it’ll be a must read for you.