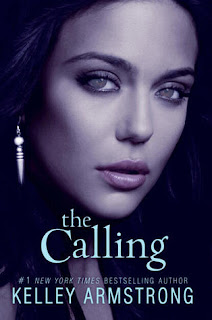 Maya and her friends–all of whom have supernatural powers–have been kidnapped after fleeing from a forest fire they suspect was deliberately set, and after a terrifying helicopter crash they find themselves pursued by evildoers in the Vancouver Island wilderness.

The Calling was a fun read, but not quite as fun as The Gathering, since I feel like it suffered from the second bookitis. Meaning it seemed mostly like a bridge between the first and the last book. Sure they get kidnapped and crash on an island and are then chased by their kidnappers. But really most of the time Maya is wallowing in sadness about another character, fate unknown until later on in the book. And we’re only left with more questions unanswered.

The characters weren’t developed much further either, with Maya and Daniel the only ones who seemed to know what they were doing the entire time. Though it seemed like one or two might have been picking things up as they went. I honestly could do without Rafe. He breezed into town in The Gathering and basically played everyone, but Maya just forgives him for it basically. I’d much prefer she realize what she has with Daniel and choose him. Because Daniel is awesome. The best friend you could possibly have, and no doubt an awesome boyfriend.

The writing is as good as ever which helped to make this a fast read. The story itself was pretty good too, I just wish we’d been given a little more. But we finally get to see something happen that was expected to happen, which made me happy so we did get something. I’m definitely looking forward to the third book.

2 Responses to “Early Review: The Calling by Kelley Armstrong (ARC)”