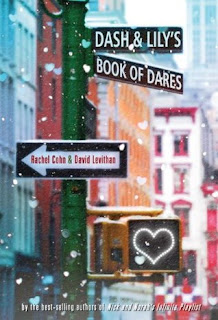 
Summary from GoodReads:
“I’ve left some clues for you.
If you want them, turn the page.
If you don’t, put the book back on the shelf, please.”

So begins the latest whirlwind romance from the New York Times bestselling authors of Nick & Norah’s Infinite Playlist. Lily has left a red notebook full of challenges on a favorite bookstore shelf, waiting for just the right guy to come along and accept its dares. But is Dash that right guy? Or are Dash and Lily only destined to trade dares, dreams, and desires in the notebook they pass back and forth at locations across New York? Could their in-person selves possibly connect as well as their notebook versions? Or will they be a comic mismatch of disastrous proportions?


My Review
So I picked this up from my library, but had planned on waiting until after I read a book from my TBR pile. But I read the first few pages one night and got so hooked on it that my original plan went out the window. This book was a fun read.


We have Lily, sixteen years old and feeling abandoned by her parents during her favorite holiday of the year, Christmas. Lily is a bit quirky, which made her feel younger than her sixteen years at times, but I loved it. Loved everything about her. Then we have Snarly, a.k.a Dash, short for Dashiell. Complete opposite of Lily. Hates Christmas, could care less that he’s been abandoned by his divorced parents. It’s interesting to see someone so rational at such a young age. I really felt these characters, primary ones as well as secondary ones, were very fleshed out. They felt real.


I love the idea of the red notebook, and two strangers meeting in such a way. Using friends and family, their community, to make it all possible. All their humorous antics kept me entertained throughout the entire book. And when they finally met, wow. Was not expecting it to happen like that. But it definitely worked that way.


I have not read any previous books by the authors together or on their own, but I’m definitely going to be checking out their other joint works soon. If this book is anything to go by, the others will definitely be fun. And I hope this gets made into a movie some day just like Nick & Norah’s Infinite Playlist.

Review: The Spindlers by Lauren Oliver
Across the Universe by Beth Revis