Two awesome covers revealed! I’ve read The Goddess Test, so I’m very excited for Goddess Interrupted next year. I think I like the cover for the first book more, but we’ll see. Maybe I’ll change my mind. I still haven’t read Matched, but I do have the hardcover edition waiting on my shelf, with many other books. I have to say I do prefer the hardback version, but I love the shade of green used for the background on the paperback. Anyways, on to the covers! 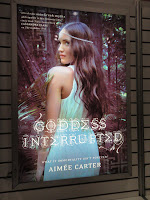 But if she wants a life in the Underworld with Henry, she’ll have to fight for it.

Becoming immortal wasn’t supposed to be the easy part. Though Kate is about to be crowned Queen of the Underworld, she’s as isolated as ever. And despite her growing love for Henry, ruler of the Underworld, he’s becoming ever more distant and secretive. Then, in the midst of Kate’s coronation, Henry is abducted by the only being powerful enough to kill him: the King of the Titans.

As the other gods prepare for a war that could end them all, it is up to Kate to save Henry from the depths of Tartarus. But in order to navigate the endless caverns of the Underworld, Kate must enlist the help of the one person who is the greatest threat to her future.

Summary from Goodreads:
Cassia has always trusted the Society to make the right choices for her: what to read, what to watch, what to believe. So when Xander’s face appears on-screen at her Matching ceremony, Cassia knows he is her ideal mate . . . until she sees Ky Markham’s face flash for an instant before the screen fades to black. The Society tells her it’s a glitch, a rare malfunction, and that she should focus on the happy life she’s destined to lead with Xander. But Cassia can’t stop thinking about Ky, and as they slowly fall in love, Cassia begins to doubt the Society’s infallibility and is faced with an impossible choice: between Xander and Ky, between the only life she’s known and a path that no one else has dared to follow.