Oh my gosh, Maria V. Snyder has a new book coming out and I didn’t even know about it until I saw a WoW for it?!!??!?!? I absolutely adored both the Study and Glass series, which I’ll be rereading soon for the blog, so I’m incredibly excited by this new fantasy series from her. I’m keeping my fingers crossed that Mira will make it available on NetGalley soon. Either way I’m pre-ordering this tonight. 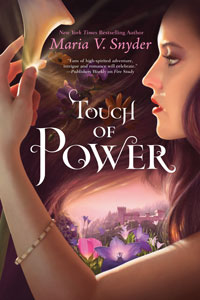 Summary from Goodreads:
Laying hands upon the injured and dying, Avry of Kazan assumes their wounds and diseases into herself. But rather than being honored for her skills, she is hunted. Healers like Avry are accused of spreading the plague that has decimated the Territories, leaving the survivors in a state of chaos.

Stressed and tired from hiding, Avry is abducted by a band of rogues who, shockingly, value her gift above the golden bounty offered for her capture. Their leader, an enigmatic captor-protector with powers of his own, is unequivocal in his demands: Avry must heal a plague-stricken prince—leader of a campaign against her people. As they traverse the daunting Nine Mountains, beset by mercenaries and magical dangers, Avry must decide who is worth healing and what is worth dying for. Because the price of peace may well be her life….