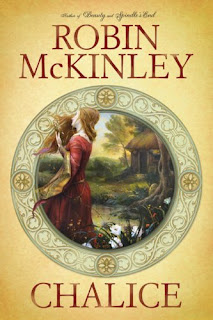 As the newly appointed Chalice, Mirasol is the most important member of the Master’s Circle. It is her duty to bind the Circle, the land and its people together with their new Master. But the new Master of Willowlands is a Priest of Fire, only drawn back into the human world by the sudden death of his brother. No one knows if it is even possible for him to live amongst his people. Mirasol wants the Master to have his chance, but her only training is as a beekeeper. How can she help settle their demesne during these troubled times and bind it to a Priest of Fire, the touch of whose hand can burn human flesh to the bone?


My Review:
Robin McKinley is one of my favorite authors, so I was excited when I finally got my hands on this book. I wanted to love this book as much as I love Deerskin, but I have to settle for just liking it.


The beginning of Chalice starts with Mirasol and how she became the Chalice to a place that had tragically lost its previous Master and Chalice. The Circle’s magical rods pointed to her, and while she began her duties as Chalice, the Circle wrote to the Priests of Fire to bring home the brother of the previous Master.


Throughout the beginning, once the Master has arrived, we’re shown flashbacks to before he came, when Mirasol was still just a new Chalice. The way in which these were incorporated into the story confused me some, disrupting the flow somewhat. That made the beginning of the book, the first eighty to one hundred pages a little hard to get into. But once I got past that first hurdle, I devoured the rest of the story eagerly.


I savored what little interaction there was between Chalice and Master, and if I could have changed anything about the novel, it would have been more of them together.

Review: Everneath by Brodi Ashton
The Probability of Miracles by Wendy Wunder
Review: Lola and the Boy Next Door by Stephanie Perkins
Review: Blood Magic by Tessa Gratton