I love medieval romance. At university I read Arthurian stories for my Honours thesis – Arthur,
Merlin, Gawain and Dame Ragnell, the Green Knight and others were my friends that year.

So when, one day, I found a book called Proud Knight, Fair Lady: the twelve lays of Marie De
France, a beautifully-illustrated translation of the Breton Lais, I pounced on it. Some stories were
familiar from Middle English versions, like the stories of Launfal and Le Freine. Some I’d never
seen before. They were gentle, funny and charming.

But one stood out for me. That was Lai Le Bisclavret, the tale of a werewolf knight betrayed by his
wife, who stranded him in his wolf shape. The werewolf was the good guy, something I’d never
come across. This was written at a time when werewolves and vampires alike were thought evil –
and I read it long before YA paranormal romances made them cool. The werewolf knight in the Lai
Le Bisclavret was clearly a born werewolf, because the only way you could become one by choice
in medieval folklore was to do some seriously evil stuff. That was the first time I’d ever heard of
the idea that you might be born a lycanthrope. It intrigued me.

The story raised questions I could only answer by writing a young adult novel which, at the time,
had the working title of Bisclavret. It went through a lot of re-writes before I finally sold it, early
in 2010, to Woolshed Press, an imprint of Random House Australia, which changed the title to
Wolfborn.

Because I love folklore and mythology, I crammed it with Celtic gods and Otherworld, although I
set it in my own universe, to give me flexibility. The history and geography of this world are mine.
It first appeared in swords and sorcery tales I wrote for a magazine called Eye of Newt.

But you can’t just make up a world; it has to make sense. Medieval cities, for example, were laid
out the way they were for a reason. You can play with it only so much.

So I read books on various aspects of the Middle Ages – cities, clothing, food, the role of women
from manor lady to peasant, medicine, the feudal system, fighting.

Okay, so the fighting in Wolfborn is more like the Society for Creative Anachronism, of which
I was a member at one point, than anything in real life. I joined in the first place to learn how it
worked – and I did, oh, I did! Ouch! Getting thumped on my helmeted head time after time because
I couldn’t keep my shield up told me what you could and couldn’t do with a sword. 🙂

I looked up information about wolves as well, because if I was going to have a race of born
werewolves they would have to have some connection, at least, with the real animals. In the end, I
kept real wolves and their habits to a minimum, but it stayed there in the background and I know I
got it right, because I sent a copy of the book, with much trepidation, to my wolf-loving friend Sue
Isle, a fellow fantasy writer, and she loved it. If I’d got it wrong, Sue would have let me know in no
uncertain terms!

All the medieval research must have worked too, because quite a few reviewers haven’t noticed it
isn’t our world, despite the three moons. And yes, I researched that too, to find out what effect they
might have on a world like ours. I had to fight to keep those three moons in. My editors kept asking
me if I was “wedded” to them. They were there to make it absolutely clear this wasn’t our world.

Some reviewers have congratulated me on playing around with the role of women, as my female

characters were doing a lot of stuff not associated with medieval women in modern imagination.

Um – no. I did make up the wise-woman-in-the-forest thing, though there were a lot of women
practising medicine and making discoveries before (male) doctors took over and appropriated such
female discoveries as digitalin. I needed a woman with a mysterious past, out on her own, and wise-
woman seemed the best way to go, so I created a character called Sylvie and gave her a daughter,
Jeanne.

But the role of manor ladies? Nuns? It’s all there in the history books. I didn’t invent that. Imagine
you’re the lady of the manor. Think you’d be sitting around doing embroidery, do you? Really?
When there’s a household the size of a hotel to run? The manor was a big farm. You had your job to
do there too.

My hero, Etienne, mentions that his mother had once been second line of defense in a war. I got
that idea from medieval paintings which showed women up on the castle walls and enemies below.

A description of “women’s communities” towards the end of Wolfborn is based on German
convents such as those run by Hildegard of Bingen, one of the greatest Abbesses of the Middle
Ages. Hildegard composed drama, music we still play and record, wrote about religion, herbs and
medicine and was the terror of high churchmen, who went scurrying into hiding when they saw her
coming.

I researched the Otherworld, which was pretty dark. Traditional fairies were not sweet things
fluttering in flowers, nor were they Galadriel. They were scary. If you don’t believe me, just read
some of Melissa Marr’s Wicked Lovely novels. She used the same books I did for her research
and was probably more accurate in how she portrayed her Faerie. Me? I like my Shakespeare, so
whatever I called my Faerie rulers, they were basically Oberon and Titania. But the Wild Hunt
wasn’t made up, and I did let some of the dark mood come through.

The characters were mostly mine – Etienne, the boy whose mentor, Geraint, is the werewolf knight,
Etienne’s friend Armand, Sylvie the wise-woman and her daughter Jeanne. The only characters
from the original story are the knight, his wife, the wife’s boyfriend and the king – but the names
were mine. They weren’t named in the original tale.

When I decided that there would be a romance between Etienne and Jeanne, I gave him a
background that would make the romance work and put him in the position of having to make a
sacrifice for her near the end. The build-up was slow and subtle because there was no time for them
to do much “lovin’” as someone put it in a Goodreads discussion I read. Maybe it was too subtle,
to the point where some reviewers have complained it’s “tacked on”. It wasn’t. The choice was to
keep it subtle or stop for love scenes in the middle of the action.

Besides, by doing it this way I got boys reading (and loving) it as well as girls. It’s an adventure
with romance in it, not a paranormal romance, so be warned!

It’s a short book, only about 60,000 words long, but there’s a lot crammed into it! A lot of work, a
lot of love and a lot of action. I hope you’ll all read it when it arrives on your shores. 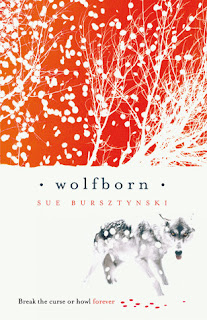 Break the curse or howl forever.

Etienne, son of a lord in the kingdom of Armorique, goes to train as a knight with Geraint of Lucanne. Geraint is brave and kind, a good teacher and master – but he has a secret that he has kept from his family. He is bisclavret, a born werewolf. When Geraint is betrayed, Etienne must ally with the local wise-woman and her daughter, themselves bisclavret, to save his lord. But time is running out. If Geraint’s enemies have their way, Geraint will soon be trapped in his wolf form.

And Etienne has his own secret. The decisions he makes will change his life forever . . .

Inspired by a medieval romance, this engaging novel forces us to question everything we thought we knew about werewolves.

I have a signed paperback copy for giveaway to one lucky US resident! Sorry international peeps, but money is tight this month so I can’t afford international shipping. To enter just leave a comment with your email address! Giveaway ends Tuesday, March 6 @ 9pm PST.