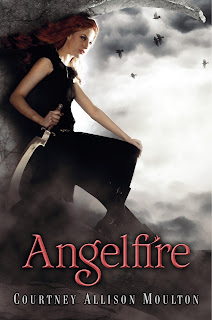 Summary from Good Reads:
When seventeen-year-old Ellie starts seeing reapers – monstrous creatures who devour humans and send their souls to Hell – she finds herself on the front lines of a supernatural war between archangels and the Fallen and faced with the possible destruction of her soul.

A mysterious boy named Will reveals she is the reincarnation of an ancient warrior, the only one capable of wielding swords of angelfire to fight the reapers, and he is an immortal sworn to protect her in battle. Now that Ellie’s powers have been awakened, a powerful reaper called Bastian has come forward to challenge her. He has employed a fierce assassin to eliminate her – an assassin who has already killed her once.

While balancing her dwindling social life and reaper-hunting duties, she and Will discover Bastian is searching for a dormant creature believed to be a true soul reaper. Bastian plans to use this weapon to ignite the End of Days and to destroy Ellie’s soul, ending her rebirth cycle forever. Now, she must face an army of Bastian’s most frightening reapers, prevent the soul reaper from consuming her soul, and uncover the secrets of her past lives – including truths that may be too frightening to remember.

My thoughts on Angelfire:
The first thing that popped into my head after finishing this book was WOW. While the first chapter or two started off slow for me (but then it usually works that way when I’m reading), it quickly heated up and became a book I could not put down. I was reading every spare moment I had.

I loved Ellie, especially more so after she began to accept who she was and what she could do. And that twist at the end, about who she really is, awesome. Cannot wait to see that explored more in the sequel. And everytime she asked Will questions that he wouldn’t answer, I was just as frustrated as she is! Will’s answer everytime: You know this already. You will remember, it’ll all come back.” I kept thinking, yes she might know even if she doesn’t remember, but we don’t! I hope we also learn more about Will than what we did in the next book. I loved all the flashbacks, getting hints about their past. I really liked Kate. She had a presence all her own without stealing the spotlight from the main characters.

The reapers were interesting to learn about, especially the vir. Knowing about them has made me question about a certain character, and whether or not he is who he’s supposed to be, or whether he was replaced. And I’m intrigued by Cadan. He seems to be on Bastian’s side, and yet has never once acted as though he wanted to harm Ellie. It’ll be interesting to learn more about him.

I would definitely recommend this for those who are following the angel trend in YA books right now. An explosive entry into this trend that makes your mouth water for the sequel!